A Division of The Texas Blues Roadhouse

The Magical Ascent of Blacktop Mojo

I can’t tell you how many times I have been in discussion of music with a ‘boomer’, (no offense, I am just under the line on that demographic myself) when they will unfailingly state something along the lines of “today’s music sucks”, or “rock is dead” or “nobody makes good music anymore”. I often immediately wonder to myself how out-of-touch this person must be, when a band like Blacktop Mojo not only exists, but puts out original music and tours annually, (both as headliner and supporting more well-known acts) with the level of musicianship, flat-out personality and self-deprecating wit that their fans have grown to love and appreciate. It’s hard not to hear them, or see their shows, without coming away wanting more, and counting yourself a lifelong fan.

With humble beginnings in Palestine, Texas, they have independently put out three albums to date, the latest one “Under The Sun” debuted at #19 on the Billboard Hard Rock albums Chart and its single, “Can’t Sleep”, landed in Billboard Mainstream Rock Top 40, rising to #27 on the chart.

Philip Mosley produced the album, and it was recorded at Rosewood Studios in Tyler TX. Austin Deptula mixed it, and has done all their mixes since day one. ‘Scott Campbell Design’ out of Alabama did the incredible artwork. Musically, it takes you on a journey of Rock N Roll living, break-ups and make-ups, sinister and spooky at times, (The Lashing-Ghost, Can’t Sleep) sorrowful Blues, (It Won’t Last, The Void) and head-banging, foot stomping, heavy-metal beats (Lay It On Me, Keep). Something for everybody, but cohesive enough to listen all the way through, without getting bored. So very listenable.

They’ve just officially wrapped their national tour in support of ‘Under The Sun’ for now, but have plenty of dates ahead, after they take a much-needed month’s break. They’ll be kicking things off again at Texas Music City Grill & Smokehouse in Lindale, TX on March 29th.

I asked the guys what stood out for them, in the making of this album, and/or in touring to support it. Drummer, and co-founder Nathan Gillis had this to say. “As far as what stood out making the record – So many of the songs started out with guitar riffs, and I really loved what Kiefer and the guys were coming up with, so much. I wanted to make sure I didn’t get too busy on the drums, but accompany what I considered to be the best guitar riffs we’ve had on a record so far. I honestly felt like I didn’t hardly do anything on this record. It was so easy to just vibe out what they were coming up with. Definitely the least stressed I’ve ever been at doing my part in the writing process.”

They have indeed made Rock fans happy with this album, (and a few ‘boomers’ too) harking back to old classic-rock gems, relying heavily on their signature ‘blues-infused-southern-rock-but-yet-indie-grunge’ sound, that somehow fits together nicely, like whiskey with a chaser of kombucha.

Their shows are lively and loud, with each of the players giving it their all, complete with a lot of onstage antics and wry humor. If it’s your first time seeing them, watch the bass player. Catt Murtis takes ‘performance’ to a whole other level. His stage name came from the need to distinguish one of the two Matts from each other, thus…Matt Curtis became Catt Murtis. Brilliant! What a character, and in action, very ‘cat-like’ actually.

Catt had this to say on writing and collaboration among the group: “I would say the biggest difference is just how we have grown together as a family, and a band. We all know how one another works, and we know how to work together, in everything we do. And we’ve all helped each other get better, at what each individual does. And writing together just comes much easier, because of that.”

Their VIDEOS are both moody (Can’t Sleep) and hysterical, and show just how good their sense of humor is, (Come Get Your Coat) while not taking themselves too seriously. They have every right to, considering their level of playing, and seriously good song-smithery going on. Each and every band member could be considered in the top category of their individual musical instrument’s mastery, and most of them have proficiency in more than one instrument. 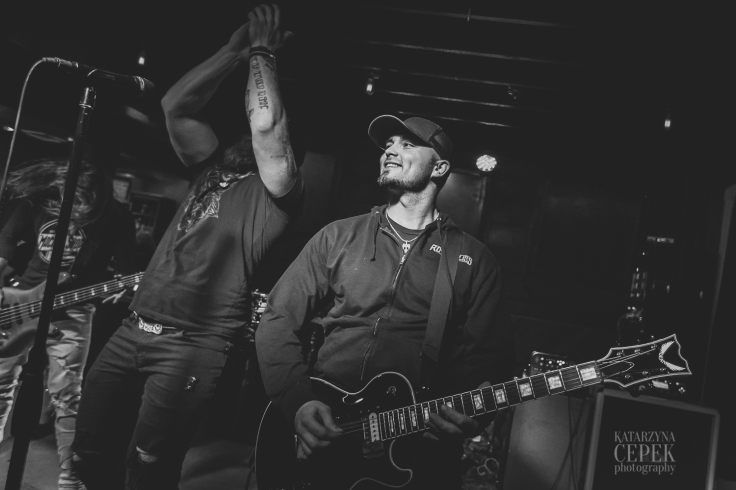 They have indeed made Rock fans happy with this album, (and a few ‘boomers’ too) harking back to old classic-rock gems, relying heavily on their signature ‘blues-infused-southern-rock-but-yet-indie-grunge’ sound, that somehow fits together nicely, like Texas whiskey with a chaser of kombucha.

Picking up new fans are a piece of cake for these guys, as I was witness to, when I caught their show at ‘Encore Tucson’ early in February, 2020. This was the first time the band had been to Tucson AZ, but the crowd was huge, and VERY appreciative. The same scenario has played out all over the country, at many other venues, not surprisingly.

…”the growth of the shows has also stood out. We’ve had much bigger turnouts in the last year than we ever have, and it’s amazing to see that happen. Especially some places where, when we played before, we had a handful of people, to now 3 or 4 times as many. It’s amazing to see, and we are so thankful!” – Catt

Co-founder Matt James, lead singer, lyricist and sometime guitar-man said, “This album was the first record we got to make as full time musicians. We got off the road and locked ourselves in our house for 6 months, and worked on it 24/7 until we were ready to track it. We nearly drove ourselves and each other crazy while making it, but we got to make something that we’re very proud to call our own.”

Ryan Kiefer, lead guitarist and vocal harmonies guy, had this to say about collaboration with Chuck Wepfer, their newest member. “One thing that stood out to me was how well we all collaborated on this record, compared to the last two. Being that Chuck is the newest to the lineup, it was great having Chuck’s input on different ideas, along with everyone else.” In my own opinion, the guitar licks are getting better with each album, and while ‘Burn The Ships’ had great riffs, this one matches or surpasses it, which isn’t an easy feat.  This is the guitar band you’ve been yearning for. So listenable, without hitting you over the head with endless solos. They show their stuff, and then you are back on the road to the melody. So tasteful, and such capable guitarists, and this band has FOUR. Catt and Matt both play as well. I think that must be the magic to the songwriting. They ALL get it. You don’t have instruments fighting against each other. Everything blends, and blends so darn well, you get to just feel the story and the playing, the way it should be.

The other pretty consistent thing I hear from fans, old and new, is just what nice guys the band members are. I got that from the first time I met them, and it continues to be a big part of their appeal. Ask some of the folks on their official fan-club page on Facebook – Mojo Nation. In fact, give it a like and follow along on their adventures, if you want.